Home > Programming > All Under Control

The original Octodad sold itself on its control scheme meant to simulate the hardships an octopus would face if he were trying to pull off masquerading as a human.  We meant to make it awkwardly difficult but since release have realized there were a ton of technical flaws that took away from this and made it needlessly frustrating.  Essentially, we took a look at the controls and tried to find ways to reduce this unintentional frustration where the player felt cheated and focused on retaining the awkward and wacky controls that players did enjoy.

So far, we’ve improved quite a bit from the original game.  Click here to continue reading this and see all the changes so far!

Compared to Dadliest Catch, original Octodad feels very stiff in comparison.  Almost like a balloon attached to two spring legs.  Dadliest Catch has a much more fluid feel to it, more so like a real Octopus.  He still bobs around in a clumsy way, but if you get really good at the controls, he moves about in a very masterful, slippery way.  The technical change was that we switched from using softbody meshes to using ropes.

High force making him standup meant lots of issues when going underneath something.

One of the most awkward physics bugs was getting Octodad stuck under or over an object and just having him bounce back and forth trying to escape.  This prevented us from having a lot of different challenges at the time, since having him glitch through objects tended to get him stuck in things permanently.  So now, Octodad’s body checks for objects above him, and if there are, he will not try to prop himself upright.

Limping about is fun.

In the original game, we added late a secret button ‘Q’ that would cause Octodad to destabilize and fall over.  There is no requirement to use this in the game, but it’s hilarious to watch and it gives a lot of control over the performance of Octodad.

There was poor feedback as to when a player was holding down left/right click, leading players to prematurely dropping their feet.  We changed up the acceleration so that player’s more quickly get a response from moving the legs.

Friction on stairs meant pushing harder with mouse to try to go up it made it worse.

Players would often push the mouse harder when they felt like Octodad wasn’t moving fast enough.  A bug with stairs meant that the harder a player tried to push their feet up the stairs, the slower the foot moved and the harder it was to go up it.  Trying harder meant worse results, and even if we wanted that to be the case, this connection was never visible to the player.  We solved this by applying the player’s force into a faster upward force.

Moving the mouse forward/back is harder than left/right.

Walking forward is more strenuous because of how our wrists work as people, so we noticed it being a lot less strenuous when we doubled the distance made for the mouse when traveling forward/back compared to left/right.

Octocopter meant sometimes you would fly.

This is fun sometimes but was a bug, so we’ve axed it…at least in story mode.

Raising the arm tentacle was not clearly communicated.

We saw from a lot of Let’s Play’s on YouTube where players played the entire game without raising their tentacle, which was pretty heartbreaking to see as developers.  In both games, you can raise your arm by moving the mouse while holding the right mouse button.  In Dadliest Catch, we are forcing the arm raising mechanic on the player more so they remember, as well as adding the scroll wheel as a way to move the arm up and down since player’s find this easier to remember.

Changing modes mean the arms would freak out.

In the original, whenever you changed modes, the arms would just freak out and pop everywhere.  This was because the original changed the length of tentacle whenever going into arms mode.  Now, there is a smooth transitioning since we decided to keep the arms the same length all the time.

Arm height would be random each time switching into arms mode.

Whenever the player switched into the arms mode, we would add a force to try to lift it a bit.  People who didn’t remember how to lift their arms would constantly go in and out of this mode to try to get it to pop to a better height, which was not the intent.  Now, we have the arm always default to shoulder height, which was largely influenced by our tendency to have doorknobs in the game.

This physics issue was pretty frustrating because Octodad would never actually be grabbing the object closely.  A book could be floating a foot away, making it needlessly difficult to place the item in your daughter’s hand. Now we make sure the object is moved to the location of the tentacle so that it looks physically grabbed.

Grabbing items was based on object’s center, but not display mesh center.

Essentially, this bug meant that if an artist modeled an object away from the center, the object would be harder to target in game.  Now the artists can model wherever!

When targeting objects, the size wasn’t taken into account, only the center of the object.   We’ve fixed this by taking into account how large the object is, as well as prioritize objects that fall in line between Octodad’s tentacle and the camera, since we found that player’s often try to line up the tentacle over the object before grabbing.

Targeting algorithm would change to a new object midgrab.

This one just sucked.  If you were trying to grab an object and suddenly the targeting algorithm decided another object was closer, you would grab that instead.  Again, the point of the controls was not supposed to be frustrating in a bad way, but this was an instance where it was.  This time around, the targeted object stays the target until it’s grabbed.

Grabbing an object required you hold down the mouse click until it was grabbed.

It wasn’t clear to the player that you had to hold down the mouse the whole time, which meant players would click, wait a second, click again, wait a second, and then hopefully grab the item by the third click.  We’ve changed it to click once (when targeted) and grab which feels a lot better.  Note that this doesn’t make grabbing objects a cakewalk now, since grabbing can fail if it goes out of reach.

Way too often objects would light up as if they were in range but be out of range.

We’ve reduced the targeting range in Dadliest Catch to be more realistic to what he is actually in range to grab.  Too often, it would light up an object and you’d spend a lot of time trying to grab it just to realize it was impossible.  We want this to happen a little bit, but the range was way too large in the original.

The original game, trying to throw the object was such a crapshoot since the physics caused objects to often fly off in totally random directions.  This time, objects can be tossed in the direction of the tentacle’s momentum, though it’s certainly not an easy task.

There’s still tweaks to be made, but so far the changes we’ve done have made it really difficult to enjoy playing the first game.  Playtesters have also been overwhelmingly positive about the changes, so we feel like we’re on the right track with balancing the fixes without ditching the whole point of the game. 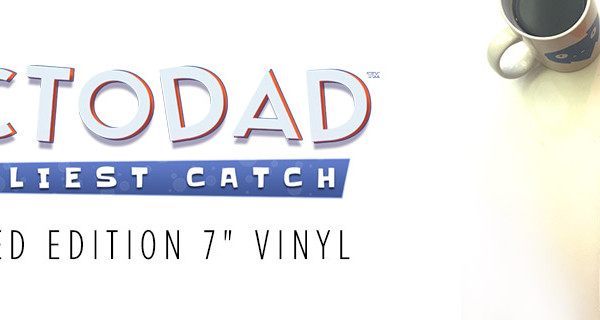