Home > Programming > The Evolution of the Tentacle

The Evolution of the Tentacle

From Primordial Ooze to Tentacle Slapping
The arm movement in Octodad started out as a prototype created back in July of 2010 by a strike team of six people. We were still at the stage of really not knowing what Octodad would be as a game, but we had the idea that we wanted to be able to directly control the tentacle in a way that hadn’t been seen before. At first  the idea seemed funny and interesting, but no one really knew how fun it would actually be. The great part about the arms ended up being the amount of precision we gave the player, and the limited ability to control that precision easily. We knew from the beginning that the game was meant to be at least slightly frustrating. A frustrating game in which you’re doing something ridiculous that ends up making you laugh enough that you enjoy it; this basic premise was the big idea behind Octodad and was also partly inspired by the game Enviro-Bear 2000.

The first prototype was controlled using an Xbox 360 controller and involved using the two thumb-sticks to move each tentacle. At the time it was still uknown as to whether we would control two arms at once or just a single arm. In the end, we wanted to concentrate on mouse input first in order to have a larger audience. Anyone using a computer to play the game will also have a mouse, but not everyone has an Xbox 360 controller. (Xbox 360 Controller controls are currently in the works and will be making their triumphant return soon as an optional control style though!) It was a real challenge finding out what kind of a control scheme would work well using just the mouse to control both your legs and arm with “complete control”. We iterated on the mouse layout for at least a month and a half before coming to a rough version of how it is in the current release. We held playtests as often as possible and usually at least once a week during this phase, as well as during most of development, in order to find the kind of control that felt best for the feel that we were trying achieve. 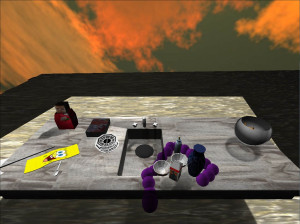 The very first Octodad prototype had some basic functionality and showed that the game could be fun with the simple mechanic of just moving the arm and knocking things around. 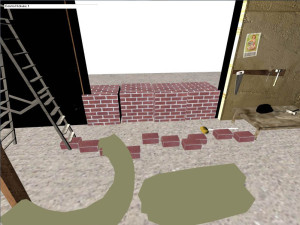 Suction Cups for the Unpracticed
Actually grabbing objects and manipulating them was an entirely different monster all together. At first you had to hold down left click and run into an object in order to grab it. You also had to continue to hold down left click in order to continue to hold onto an object just like you would in real life. At this point in development we also were still giving complete control to the player when it came to grabbing. You had to move the arm all the way to an object and actually touch it before you could even pick it up. It seemed intuitive to about half the team and completely terrible to the other. Eventually this was abolished due to playtest responses and some further iteration in order to reach the current grabbing configuration. People found it really difficult to both hold down grab and hold down the right click in order to move an object up/down. This was weird to some of us because we thought it was really simple, but after playing the same thing for months and having actually programmed the functionality of a control scheme almost anything seems easy.

Guided movement for the arm and for grabbing came later after an interesting playtest by one of our advisors, Alexander Seropian. (Alex is currently Vice President of Creative Development at Disney Interactive Studios.) Some of us had realized previously that maybe we were making it too difficult for players to interact with the world as it was, and helping them out in some areas to create a sense of simple accomplishment may not be the worst idea. It is actually pretty surprising how excited someone gets by just being able to pick something up to play with it. The more easily the players were able to do this the happier they were and the more quickly they could get to the other interesting parts of the game. Even though we were all aware of this it was Alex’s push that convinced us it was worth implementing given our time constraints. 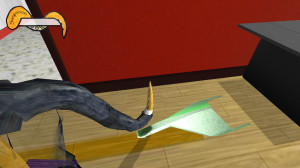 Here we can see that the object is being selected as the target you will grab by its green sheen.

Looking Spiffy
The most recent issue that I have been tackling with the grabbing is that initially, as you may have seen in version 1.6.0 of the game, there was an odd amount of distance between the object being grabbed and your tentacle. The reason this had been happening was because the collision models used in nvidia’s PhysX were slightly larger than the graphical models of the objects. In order to remedy this we had some of our artists go back to the drawing board on the collision models to bring them to a more appropriate size. Shrinking the collision models did help in reducing the gap between the tentacle and the object, but there was still a noticeable distance between them. 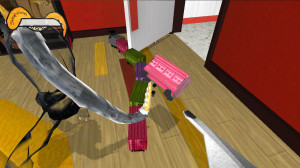 There’s still a bit of an ugly looking gap.

To better improve the look of the game I have recently tried moving the graphical model closer to the object while leaving the actual distance of the collision models the same. The arm model’s position was already being controlled by the “bones” given to it by the artists. These bones match their positions with the positions of the PhysX hard body actors in order for the arm to rotate and move how one might expect it to. This does look a lot better than before, but there are still a few issues that need to be worked out before including it in the next release of the game. 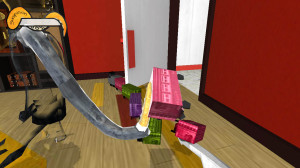 Much better, but still not perfect.

If you happen to have any questions or would like to get into more detail with this subject or others feel free to email me at philtibs@octodadgame.com or leave a comment below.

We can rebuild him. We have the technology.