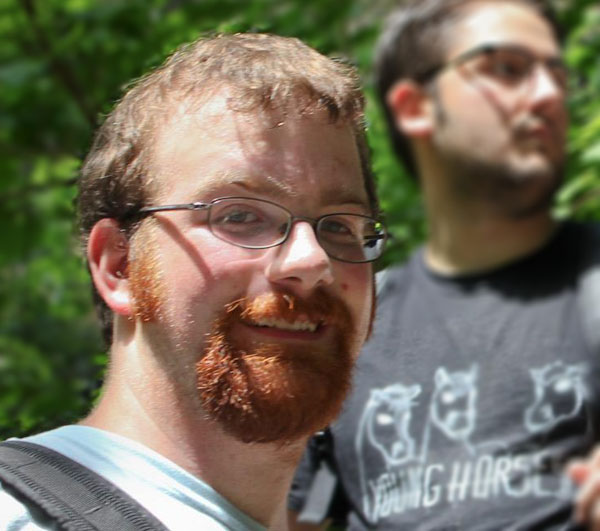 ‘Horse Talk’ is a series here on the Octodad blog where we’ll be running some intra-team Young Horses interviews. The first 2 or so questions will be the same for each horse, but afterwords we crowd-source the team for things they’d like to ask the interviewee.

Who are you and what is it that you do at Young Horses?

I’m Chris Stallman, the lead artist on Octodad where I focus on characters, architecture, some UI, and just try to make the game look as pretty as I can. I do my best to squirm my way into every aspect of design on the game as well; Having all the fun of discussing ideas and making things work, without having to implement any of it (thanks designers).

What are your favorite games and why?

I’ve always been a fan of Sim games like The Sims, Sim City, and Roller Coaster Tycoon. It’s just so much fun to build things and see how they work in game. There’s a certain creative freedom that I enjoy about them. Balancing aesthetic and function. The build music for The Sims is forever burned into my skull, I’m pretty sure I just built cool houses and finally quit when I couldn’t build basements or split level homes. Pokemon has been a favorite of mine since the beginning. Playing Red version, exploring the land with my Charmander, an unopened Official Strategy Guide just in case I got completely lost, and a burning need to be the very best, like no one ever was… It was really the sense of adventure and discovery that hooked me. Finding new pokemon and evolutions was a great joy. Eventually I became a fan of shooters. I got killed by my friends in Halo, stormed Omaha Beach in Medal of Honor, and found a great clan to play Battlefield 1942 with for years. They were great ways for me to just hang around with my friends, both online and off.

How did you get into game development?

Battlefield 1942 and its mod community was my introduction to game dev. After seeing all the mods I couldn’t help but want to try to make my own. I was part of a clan called HIT and we would have map nights on our server. I jumped in head first trying my hand at map making. Then I discovered how to include assets in the map file itself. I created a rail yard map that had a train run through it periodically and was working on a map that every building in it could be destroyed. Unfortunately, the destructible buildings wouldn’t work on some servers. Most of my maps never got fully finished as I’d have a new idea I wanted to try out. I also attempted to start a full mod project with my clan, but I was young and somehow didn’t realize how much effort such a project was. And that’s how game making pushed its way into my plans for animation glory.

What is an art style that you think would be really hard for you to pull off but that like so much that you want to figure it out? What art styles are you looking forward to exploring in future games?

I’m still not comfortable nor confident with 2d art and drawing in general. I always wanted to be a 3d animator and as a result, let development of my drawing skills fall to the wayside. It wasn’t until I started designing characters for Octodad and taking 2d animation courses that I realized my mistake. I’ve been doing my best to play catch up. I’d like to work on a 2D game at some point. As far as what style it will explore, that depends more on the game itself.

I’m drawing a blank on this right now. I’m a bit too introverted so I don’t meet enough people to really know.

Let’s say you had the resources to create your dream cartoon show. What would it be? What kind of cereal would you eat while watching it?

If I had the resources, I would find someone who has a project they are passionate about and that I would love to work on. While I do like coming up with ideas for things, there is nothing I like more than to help develop and expand someone else’s ideas. I feel like I’m a gardener, I choose something I want to grow, and do all I can to make sure it turns into something grand. I’d eat Trix, because its delicious and I don’t care what the commercials say, it’s not just for kids.

What aggravates you most about game development?

I know it’s a necessary part of development but I hate putting a ton of time into making things that end up getting cut. It feels like a waste of time, but I know it’s for the best. That doesn’t mean I have to like it.

If you could have any pet (living or dead) what would it be?

Hmmm, I think it would be pretty cool to have a crow as a pet. A quick google search tells me it is illegal to do so, but if that weren’t the case, I’d like to care for one. Why a crow? My dad was telling me a story about a kid he knew in elementary school that had a crow. The crow would fly with him to the park, hang out and squawk while he played at the playground. Occasionally it would land on his arm. He made the crow sound like a real bro and I think that sounds like an awesome pet.