Home > General > Time Travelling Churches: A look at our first level in development.

Time Travelling Churches: A look at our first level in development.

Hello all, Kevin Zuhn here with a message from the past: Building tutorial levels is hard! Back on the first Octodad we left our tutorial level until late in development, and it shows. Upon starting Dadliest Catch, we decided to do it right, and build the tutorial first. This time we would make it a wedding scene in a church so that it would be exciting and memorable as well as informative. The church level has therefore been in development from day one, and you can look back through its history to see how Octodad has taken shape over time!

Lucky for all of us I kept archives of outdated versions of Octodad from years past! Take a walk with me through time. Don’t worry, it won’t make your nose bleed. I think.

One Month Into Development:

Welcome to late July, 2011! At this time, our Kickstarter was still weeks away from finishing. Functionally speaking, our sequel was still identical to Octodad, and our editor had only advanced slightly since the end of the first project. You can see in the chapel below that we had old character models, and if you were to play this, it would be with the old controls! 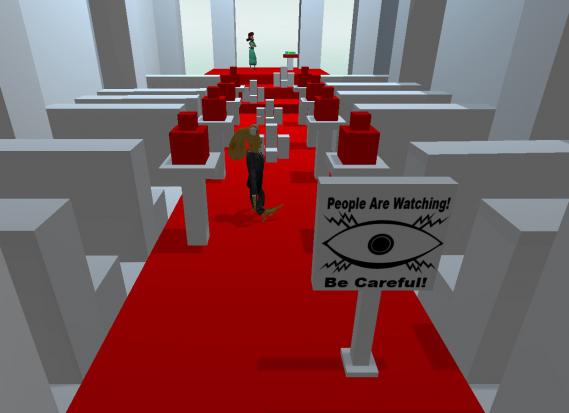 First, make it! All of our levels start with a blockout. That means that without art we simply use big colored blocks to represent walls and objects. We have to see if the shape and space of the level is going to be fun to navigate before we go putting a lot of effort into art assets! We tried to keep ourselves from using the old user interface, and instead created big signs with instructions on how to play scattered throughout the level. At the time, rooms were entirely functional. A dressing room to teach you about arms. A hallway to teach you about legs. A chapel to teach you about suspicion. 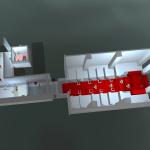 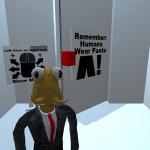 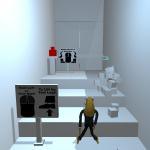 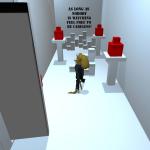 Welcome to late October, 2011! Months after our successful Kickstarter, our development is picking up! We have a shiny new model of Octodad, with new wobbly body physics to match. Unfortunately the controls still feel like your mouse is underwater! There are prototypes for other challenges and levels in the works, always stretching the capabilities of our editor. 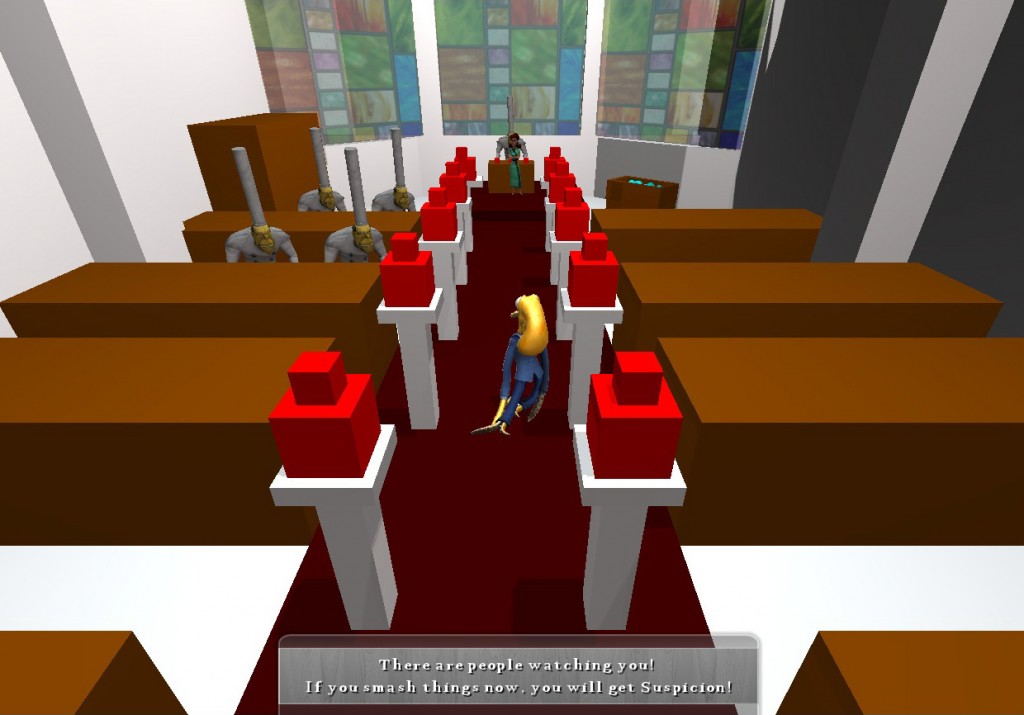 Second, make it work! We playtested the blockout every other week, constantly looking for new players to introduce to the game. You can’t know if a tutorial is working if you don’t have people new to the game! A few art assets had been made as we felt out our graphical style. We wound up doing a lot of abstract art (like the cake in one of the screens below) to try and make the blocks look like something recognizable. When possible, we recycled old assets from the first game until something new could take its place. A few new rooms and segments are added, such as a reception room to let players stretch their legs and knock some tables over, and a window to teach players about throwing. 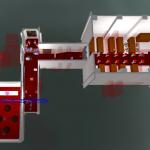 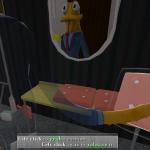 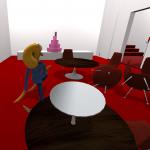 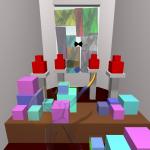 Welcome to mid-March, 2012! We are deep into the swing of things now. You may notice the large quantities of art below! The controls are also working well! At this point, we have two other levels completed with art, and another few being blocked out. Two months from now, those levels will all be brutally cut down. But don’t tell us, as it’s wrong to interfere with the time stream. 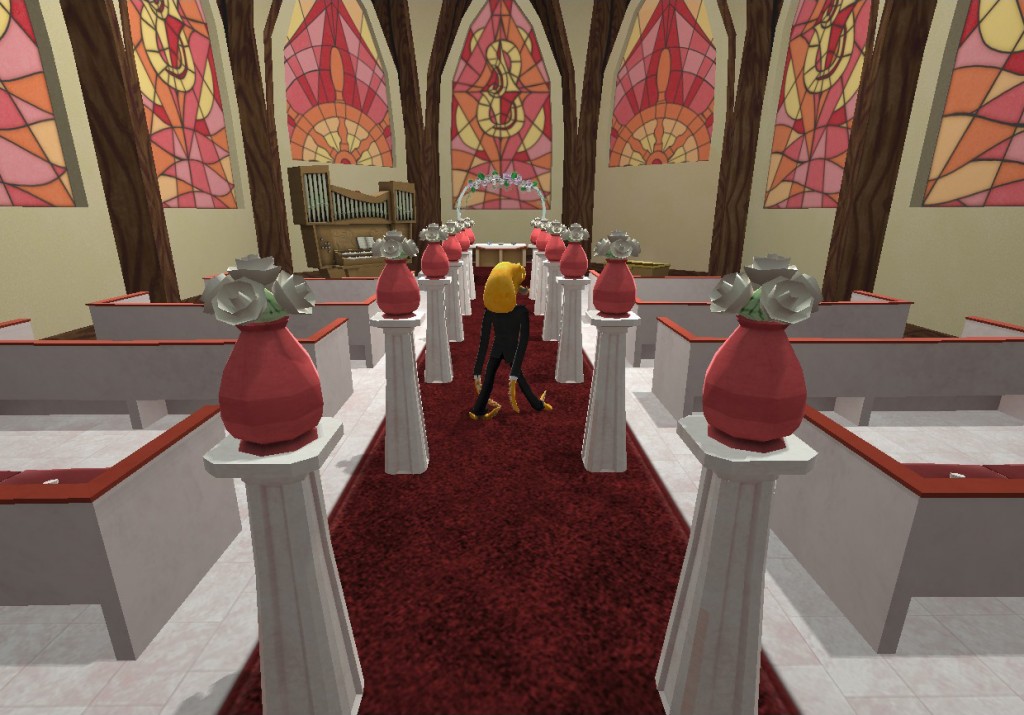 Third, make it good! I’ve talked before about how much “looking like something” matters. For all the effort that we put into making blocked-out levels work well, it isn’t until they get architecture modeled that we really rush to complete them! In this version, the church is filled with miscellaneous details like wall paintings, a button for partying, and a bouquet-tossing minigame. Functional levels are great and all, but what is Octodad without random stuff to poke, prod, and knock over? 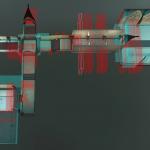 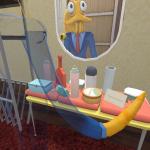 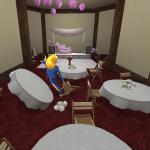 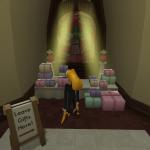 Welcome to the world of April, 2013! Oh wait, that’s now! We’ve been Greenlit, many levels have been finished, and nearly all have been blocked out. Yes, over a year has passed since the Church level was considered ‘done’. But you may notice a big addition; people! It took us quite a while to get other characters in the world. Not just as models, but as systems that react to Octodad! 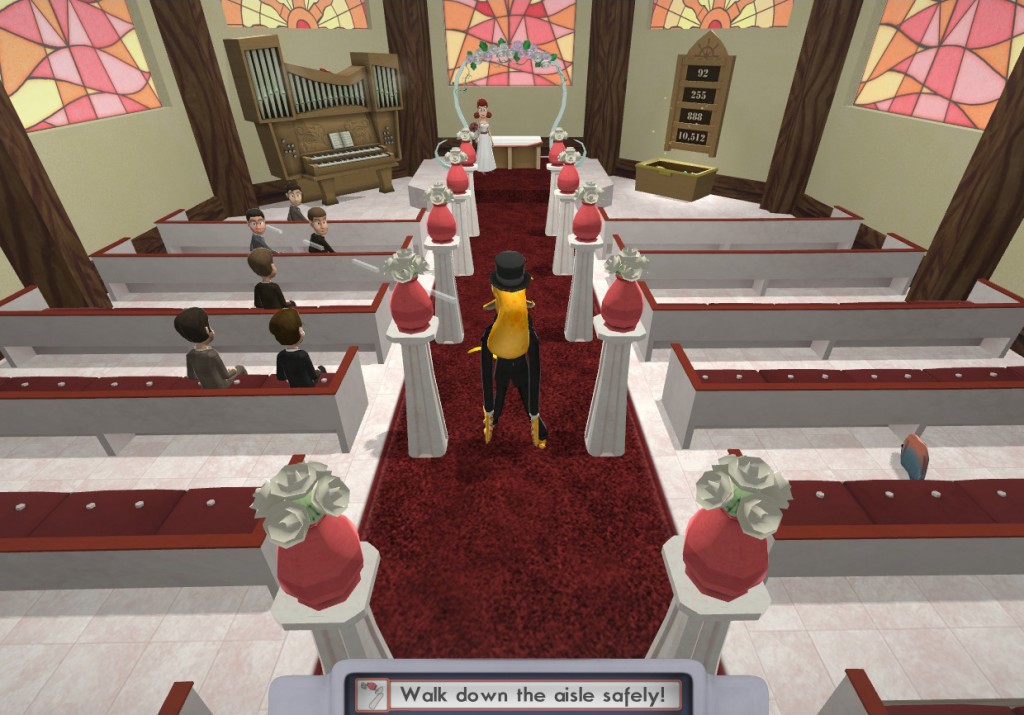 Finally, make it better! No matter how much time passes, we can always make improvements. The lighting is better, there are even more models, and most rough spots have been gradually smoothed out (for instance, a tricky problem with doorknobs). It’s not just about adding, of course. The bouquet-tossing minigame mentioned above was removed for being too confusing. As long as we’re still developing Octodad: Dadliest Catch, the church will be continuously revised and reinvigorated! 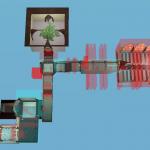 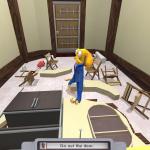 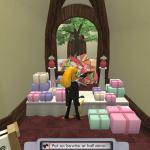 Well, thank you for joining me on this trip through the ages. Now I better be off, I’m getting a killer nosebleed!

How to Mod Octodad Levels

The Evolution of the Tentacle